OASIS learning village – do we need village life to learn to live again?

OASIS learning village – do we need village life to learn to live again? 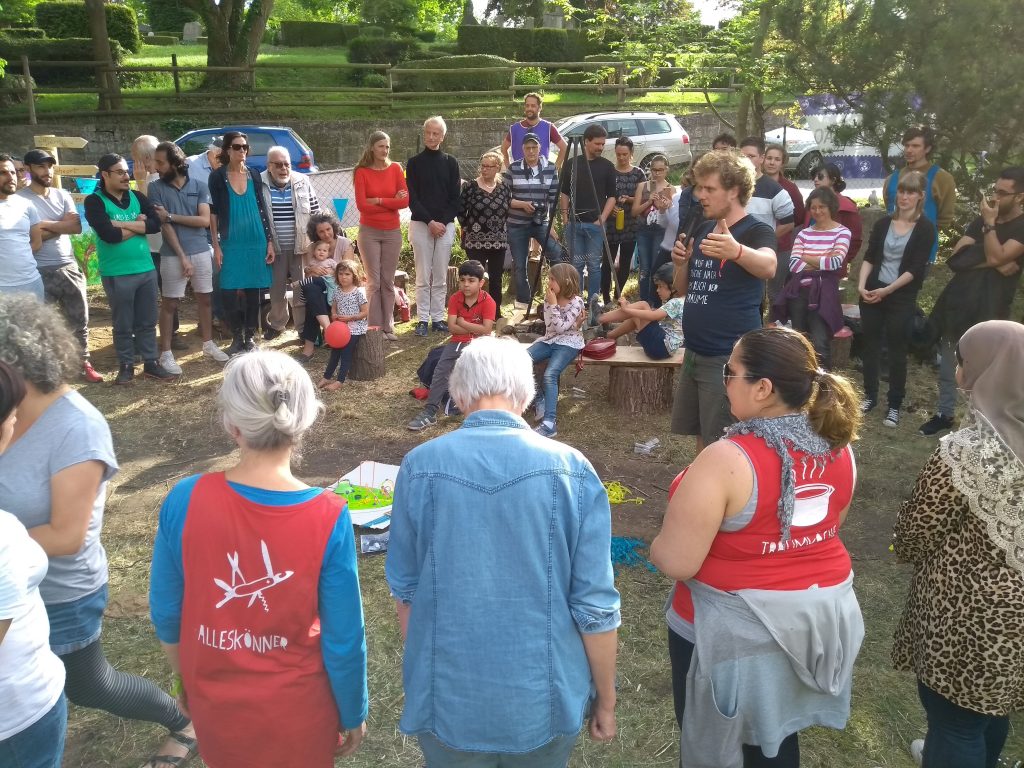 I have always been intrigued by the concept and sound of a learning village. A big inspiration has always be the Kufunda Learning Village in Zimbabwe, where learning about ourselves and the land is part of building a culture of resilience. Although this place is very close to an eco-village concept, I believe putting learning at the centre of how we live together could be possible in many more places. I’d dare say that it will be more and more needed to discover new ways of living together to deal with current and forthcoming challenges.

This inspiration and ideas was at the centre of our Oasis Learning Village program. In the spring of 2019 we hosted a 10 day immersion in rural Germany based on the premise that the idea of village life resembles a way of co-existence in which people could construct relationship of growth. The Oasis Learning Village brought together participants from 6 countries across Europe to live, work and grow together with the residents of Bad Gandersheim. I’d like to share some experience of what I saw we learned.

Diversity in rural Germany
Bad Gandersheim is a small rural town of around 4.500 people in the centre of Germany. It used to be a place with thermal baths, and many visitors and now is a friendly town with a lot of traditional German buildings in a hilly landscape. Just like many other places across Europe it has recently increased the amount of foreign inhabitants, refugees from Middle-eastern and African countries. The pull to do it came from Klaro a community centre welcoming people of various backgrounds and walks of life.

During the program we worked extensively using the Oasis Game, a Brazilian methodology for bottom-up community development that has spread around the world. The foundation of it is that we go through a 7 step process in a 10 day program to playfully engage a wider community to co-design, co-create and construct a place that resembles their collective dreams and aspirations.

In only 2 days we constructed an immensely beautiful community garden, with playground, fire-circle, chillcorner, seating area and a pop-up living room.

That’s the power of Oasis, making the world we dream of a reality, now! This methodology has nowadays been used almost a 1000 times in more than 50 countries, yet generally is applied in urban context. Our assumption in applying it in a small-town village context was that we work with a context in which we could explore and experience more deeply the saying ‘it takes a village to raise a child’.

This saying invites us all to be educators and responsible to create a positive environment for growth. Although it speaks of a child, my conviction is that the child represents us all here. Although the program took place in an actual village setting, what really came through to me was that ‘it takes a village life approach, to raise us all’.

What seemed impossible was done in a very short time and through that we collectively gained insights that are valuable for the multiple challenges we’re facing now. In and beyond villages.

In my opinion one of the biggest learnings of such projects is that we have to learn to believe again. This is the single biggest thing that withholds us from creating the life that we want, the life we believe in, the life that awaits us. Individually and collectively.

This lack of belief is imprinted in us through individual and collective belief-systems and constructs. Some come through discouraging experiences in life, others we just learn through the systems we’re part of and daily operating in. Stepping beyond it takes guts, but it mostly takes belief. Most of us in Europe resonate with the saying ‘first see than believe’. Our starting point is ‘first believe, than you’ll see’.

This was highly challenging for some of the residents. In the 4th step of the process we gather the community to come together to affirm the collective dream and to co-design in a playful way how this could look like. This happens on mini-models representing the dreamed community garden and space, which after deciding it together we’d build-up 3 days later. The ‘ghost of not believing’ stirred its’ head twice strongly that evening.

One of the strongest voices came from a resident who stood up and quite strongly expressed that it’d be ridiculous to think we could do that in such a short time. Although there were more elements at play, the main source of disbelief came from a life-long experience that such developments can only take place through established structures and processes. Especially through the appropriate institutions. How could we think we’d be allowed and able to do that in such a short time?

This person over the years got stuck in a belief that we as people only our institutions can do such things. In north-western Europe, this is a pre-dominant conviction. And at the same time there’s also a group of people that do follow more their sense of initiative, but lose their belief because they become lonely fighters, instead of collective dreamers. This creepy little voice of inertia expressed itself a couple of times with ‘but we already tried so many times, why would it work now?’.

It was a joy to see that after the 10 days program of which 2 days were spent on building together, both people were more than surprised to see that nothing is impossible. Although the group of participants of the Oasis Learning Village program came with a specific objective, the most important role was to facilitate a space where people from the village saw things were possible and sparked the power of belief.