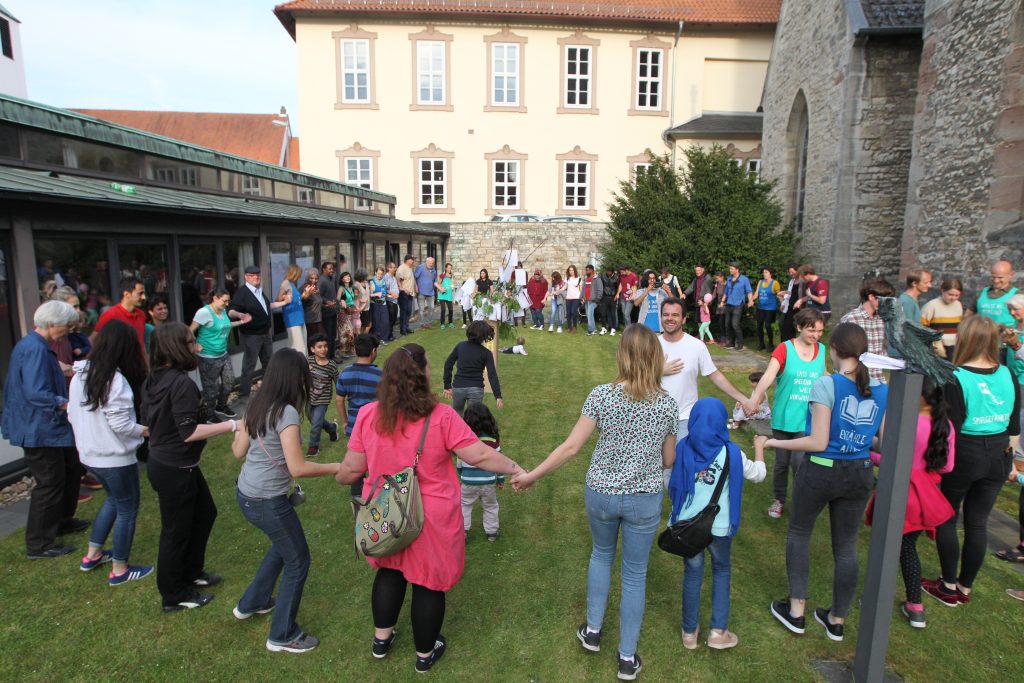 What must the passers-by in Bad Gandersheim have thought when a colorful group started to perform a Brazilian circle dance in the middle of the city on Saturday morning? When couples with blindfolded eyes appeared on the market square and touched the old church wall? One rarely saw so many young people here, and they were so motivated. What were they up to?

Only one week later, almost 100 committed people from Bad Gandersheim would dance with these young people in this very same circle dance?…unthinkable!

Between 17.05. and 27.05. I went with an international training in Bad Gandersheim the Oasis Game Learning Village on a playful journey of discovery. Twentysix people, thrown together from 6 countries came together with different backgrounds, united by the interest to make the world a more beautiful and playful place. Our mission: to lure the inhabitants of Bad Gandersheim out of their reserved comfort zones and to inspire them to play along.

What is possible when a small North German village not only begins to dream, but also makes these dreams come true?

On that Saturday, when the game begins, I walk through the streets with Karolina from Slovakia and we look for people with open faces. Our mission: To connect. To collect stories from the people of Bad Gandersheim about their city. We succeed surprisingly quickly, get involved in exciting conversations. We had not expected it to be so easy. The secret? We are sincerely interested.

“We play a game and are looking for stories about the city and dreams for the city, may I ask you what dreams you have for Bad Gandersheim? The elderly lady with mild facial features and warm eyes invites us to her garden. There she tells us anecdotes from her time as a teacher. We listen spellbound. At some point I ask again about the dreams for the city. “Oh, you know, I talk every day, here at the garden fence, with my neighbours about the city; I always know exactly what’s happening, but we also have no ideas what might change.” When we turn to walking, we notice a large loom in an adjoining room: “Is it still in operation? The old lady shows us magnificent works of art she has woven from all sorts of materials. I am impressed and we have discovered our first talent from Bad Gandersheim. That would become relevant later.

When we come back, the stories that were collected are shared. An euphoric mood arises, each couple has experienced something and found something new. Many small puzzle pieces give a multi-layered impression of the people in this city. We feel like a research group gathering their results. A common characteristic that we discover: many – especially older – Bad Gandersheimers emphasize time and again that the golden years are over.

We are in the first phase of the game: appreciative look. This began with us exploring the city with different eyes, always looking for the beautiful, special things. Then we asked ourselves which people were behind it. What hidden talents were waiting. We invite all the talents we discover in the city to a talent show on Sunday evening.

Mrs. Hoheisel, whom we saw the day before, also comes here. She brings her knitwear with her and receives enthusiastic reactions. She tells us that she would like to offer sewing courses, also for men. Many other talents introduce themselves: there is Jens, who has faithfully reconstructed the station and the cathedral from Lego and would turn out to be an enthusiastic player. There’s Dieter , a professional entertainer. There are children performing football tricks, singing and card tricks.

After the presentations, small groups are formed to collect dreams for the city. In my group a wild potpourri of street festival, meeting café and market of possibilities is created. At the end all participants get to know the most important element of the oasis game: celebrate together! We learn different dances from each other, Brazilian as well as Arabic.

In the next days the follow-up will take place and the next steps will be planned. The group, which in the meantime has grown by several Bad Gandersheimers, meets daily in the Klaro – a kind of public living room of the Diakonie. On Tuesday, the next event will take place on the market square: a design workshop, where the dreams that have been collected will be made concrete with the help of maquette models. With the help of colorful clay, two concrete designs are formed: on the one hand, the idea of a community of people and the idea of a “community of people”.
As plans are ready and groups have formed, it is time to activate resources. Who knows someone, that knows someone, who could contribute what? This phase is the intensive preparation of the big showdown: after all, something shall happen at the weekend – in the oasis game, this phase means making miracles possible.

And that’s what takes place. What happens on Saturday is simply unbelievable. One group has agreed on a piece of land that is to be cultivated and another group has set up a living room on the market square to ask more Bad Gandersheimer about their dreams. Everyone is enthusiastic about it, most of it works auto-organized, where you can quickly lose track of what’s going on. But things come together as if by magic: a graffiti artist sprays the garden house, two carpenters build a bench, somebody brings soup, somebody else has been given several pizzas by the local pizzeria.

With embarrassed laughs and tipsy steps, on Sunday afternoon, the group learns the dance “Alma”, with which we celebrate the conclusion of the oasis game; the same, which we had learned on our first day in the city centre. I look into radiant, sometimes even touched faces. Before the dance, all the achievements of the weekend were presented and for each element all those involved were allowed to run in circles in order to be have a high-five with all the others. So many high-fives just make everyone feel good – what we did is quite magical!

The result was a colourful community garden on a formerly fallow area and a thirsty living room initiative was formed, which had an enriching afternoon in the city centre and is planning further events for Bad Gandersheim. But above all, it is the new encounters that have taken place that make this afternoon so special. Everyone is celebrating here together: young kids, pupils, yougsters, retired seniors, teachers, refugees, life artists, social workers, residens form different groups. The evening ends with guitar music and a rich buffet.

Mrs Hoheisel gives me a big hug to say goodbye. She didn’t dance with me, but she did help out in the garden. She thanks me exuberantly and says “I wouldn’t have thought that possible”. Well, maybe the golden years are just beginning.