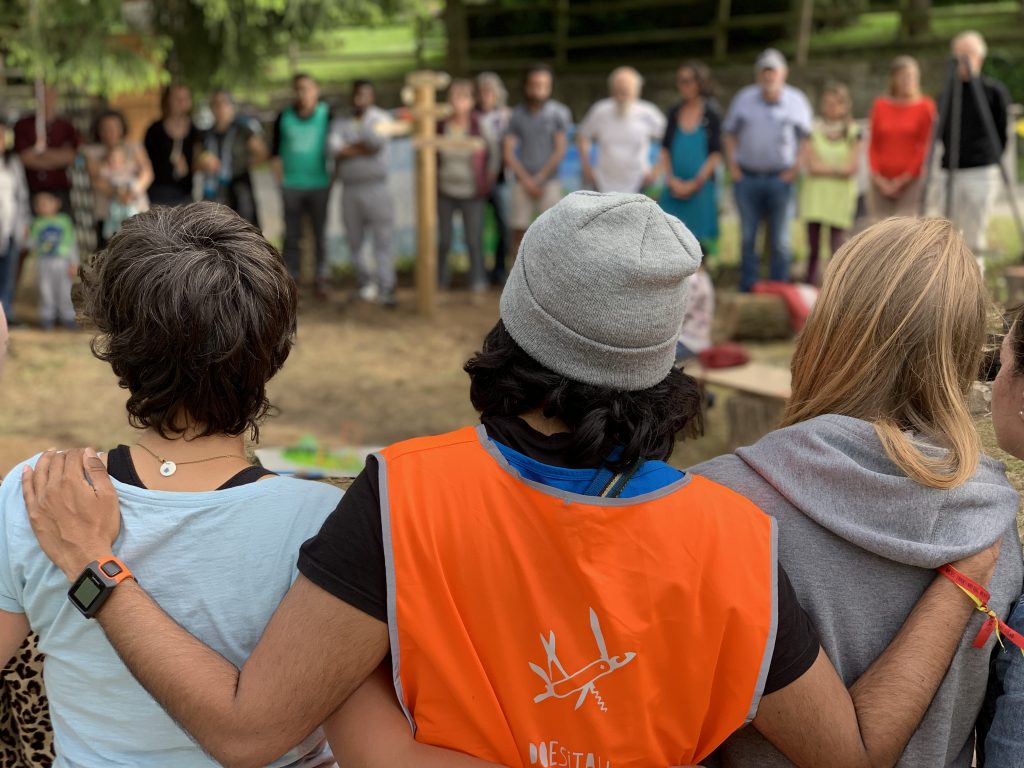 From dream to reality on two weekends, this challenge was presented to the residents of Bad Gandersheim in Germany and guests from 6 EU countries. Many said the first it is not possible – and were quite surprised what power arises when many people of different origins and ages tackle a common challenge.

The Oasis Learning Village is an EU Erasmus + supported project. 26 participants from Spain, Netherlands, Italy, Slovakia, Belgium, Germany came together from 17.-28. of may 2019 for a 10-day action-learning training based on the brazilian methodology Oasis Game for community mobilization and community empowerment. The Oasis Game brings together a neighborhood to collectively dream, plan and implement a community project with the goal of strengthening a community spirit, social cohesion,  inclusion, self-efficacy and self-initiative.

After a first day of arrival, getting to know each other, basic introductions and teambuilding of the community of players from the different EU Countries, the challenge of the oasis game started to invite and mobilize the community to dream together and co-create. In the spirit of learning by doing the participants were challenged going out looking for beauties and resources and as well to get to know the people around. For the residents of Bad Gandersheim, the oasis game began at their doorstep or on the street when an oasis player spontaneously addressed them to ask you about the beauties of Bad Gandersheim or asked them for their talents and invited them for one of the public community meetings to participate in the oasis game.

The first public self-organized meeting by the oasis players with the neighborhood was a talent show. The oasis players are the hosts; prepare the program, decoration, atmosphere and place. Everyone is invited to share his or her talents. At first, shyness and disbelieving comes up by the question what is your talent – or what can you do well? Then a colorful entertaining afternoon ensues and the stage fills with songs and music, artisanship, arts, sports demonstrations and much more. It shows everyone has talents, the collective appreciation of these feels good. Surprisingly new talents in the community were discovered and the basic ideas of ​​the oasis game were introduced to the community. Followed by time to get to know each other and exchange first ideas about dreams of the community.

The search for the dreams and even more after the collective dreams of a neighborhood is central to the oasis game. When people are asked about their dreams for their immediate living environment – time, space can stop for a moment, and a special space of opportunity opens up. People grow larger in response for a moment, growing beyond themselves – dreams give wings. By intensive dialogs far more than 100 dreams, ideas and wishes of residents were collected. The challenges for the oasis players to deal with the diversity of the place and capture it as far as possible: young / old, people with a refugee background, people with migration history, longtime residents and newcomers and how do host a good authentic dialogue about dreams.

By getting know the dreams, ideas and wishes of the community, the oasis game does not stop- it really starts. The challenge for the neighborhood to choose one or more collective dreams together and to realize them together in the shortest possible time on the following weekend, with the power of many hands and with the resources that could be mobilized in the neighborhood.

For the next meeting with the neighborhood on Tuesday, the collected dreams were evaluated and categorized to introduce them to the community. During the meeting, 3 dreams were favored out of the many by the community: to build a community garden, benches and seating with the project name “optimist benches” and as a third project a new space for culture and music. Together models were made of the projects to get an idea of ​​the possible implementation and to include the exact design ideas of as many as possible. Local gardeners and local residents, due to the question if the project could be realized in 2 days, gave advice.

After the first intensive days in Bad Gandersheim, the participants of the EU Youthworker Mobility had time to take a deep breath and reflect on the experiences and the methodological background of the Oasis Game, Community Entrepreneurship and Facilitation.

Then Thursday started the planning and resource mobilization phase, starting with the search for the required resources and talents in the neighborhood. Who has wood, earth, plants, tools, shovels, screws, nails, paint and much more to realize the dreams? Who could actively support with his talent on the weekend? What are the places, areas, spaces where the dreams could be realize? The participants of the EU Youthworker Mobility together with the community planned strategies of how to organize the structure of the collective hand-on, how to mobilize the community and how to ensure that the different needs of the community are represented. Everyone ´s help is welcomed and the invitation to help for a specific activity or to help with materials is opening many new contacts in the community. Thus, the number of people involved grew constantly to much more than 100 people who shared their ideas, actively help or gave their tools and resources.

On Friday the ressource hunting continued and late afternoon, the hands-on (miracle phase) started in a large heavily overgrown garden at St. George’s Church. Over the last night, the owners gave its last minute OK that the future community garden of Bad Gandersheim can arise. On Saturday with the power of many hands, the work began to make the garden accessible again. Parallel at another place with equipment to work with wood the work started to build the so called “optimist” benches. Another workinggroup took care of the food and cooked for all helpers this weekend. Another group continued to pursue the dream of creating a space for music and culture. As it was not possible for this weekend to find a suitable space, quickly idea was born of ​​a “pop-up living room” on the cathedral square to make the essence of the dream happen this weekend. An open-air living room (coffee space) als cultural event where people passing by can talk to each other in a cozy atmosphere about the future and needs of the town.

The images can give an impression of the transformation of the garden, where there was still overgrown area, potatoes were already planted together on Sunday. Even though to feel the atmosphere with which intensity co-creatively was worked together and a lot of new ideas were added and realized during the process with the participation of young and old as well as different cultures, is difficult to put into words. Thus, the garden was redesigned with a cozy fireplace, sandpit with Tippi as a playground for kids, wooden lounger as a quiet place in the vinegar tree forest, a small stage for culture and music and the self-built “Optimist benches”.

On Sunday afternoon at the opening ceremony, the garden was filled with people. The aim was to celebrate the joint achievement and to appreciate the contributions of each individual. In a collective naming process the garden was named “oasis garden”. The results went far beyond the notions of each one individually, were surprising and let people not without a few tears of emotion recognizing the power of the jointly achieved. A special touching atmosphere of community was in the air, which was cultivated over the course of the process.

In addition to the visible material result that the oasis game leaves behind in a very short time, the social dimension and collaborative learning experience have to be seen as an invisible special treasure the process. Because the end of an oasis game process marks only the beginning of new networking, connections, cooperation, confidence building and cooperation to tackle other bigger dreams of the community together in the future. The oasis game calls this final and new starting point the phase re-evolution. Looking back together to appreciate the common experience and the learned to appreciate and internalize.

The participants now had time to look back on the learning experience, to reflect, to develop ideas how the learned can be applied to their own context, connect the learnings to current common challenges in youth work and social work in Europe as working with diversity, inclusion of people with a refugee background and revitalization of rural areas. Moreover, it was the time to dream together about new Initiatives and bigger. The closure of the oasis game was a meeting on monday night for the re-evolution with the neighborhood in Bad Gandersheim. Inspirational stories were shared what happened in other places in the world where an oasis game had taken place in the long term. Then it was time to dream new and bigger and set up a plan with joint actions for the next month / in 3/6 months. Finally, it meant farewell to the guests from 6 EU countries after 10 intense days.

The playful and welcoming atmosphere, the short-term nature and the character of a challenge is especially inviting young people to participate in an oasis game. The vibrancy and spontaneity of the weekend by working together have surprised many young people from their small town, which they described as sleepy at the beginning of the project. The experience showed what is possible with a social entrepreneurial attitude by just start doing and co-creating.  The oasis game can create an atmosphere and opportunity to experience and make tangible our basic social values ​​such as respect, empathy, helpfulness and solidarity. The welcoming and invitational attitude of the oasis game, regardless of political, social, migration or refugee background, age, disability and gender, to work together for a concrete concern in the local context, can contribute creating new experiences beyond the everyday barriers of group affiliation and prejudice and such strengthen inclusion.

Each phase of the Oasis game offers specific challenges, learning experiences, and new perspectives for participants and residents beyond the daily routine, giving the chance in testing and cultivating new attitudes and behaviors:

1. Develop an appreciative gaze of oneself, others and the environment.

2. To recognize, appreciate and connect local talents, resources and potentials.

4. Carefully plan strategies for the implementation of the dream while being attentive with yourself, others and the collective dream.

5. Co-Creative Collaboration: experiencing the power of working hands-on together towards the realization of collective dreams. Achieving goals short-term together in a spectacular and fun way.

6. Celebration of the collective achieved and the contribution of each individual.

7. Integration and internalization of new experiences and learnings. Realizing together new and bigger dreams